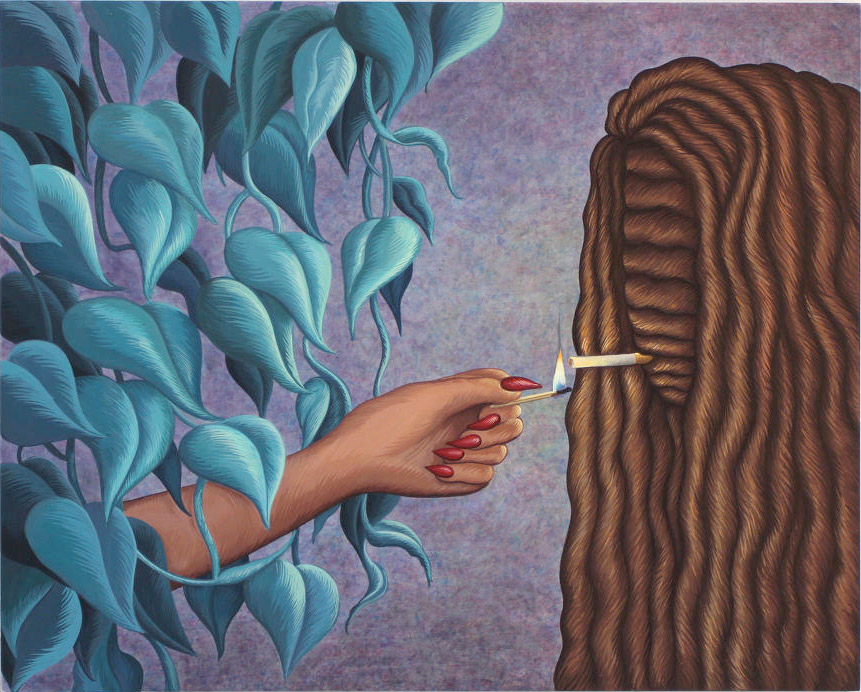 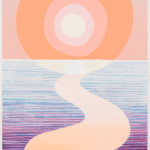 Monya Rowe Gallery is excited to present a two-person exhibition of paintings by Julie Curtiss and Matthew F Fisher titled “The Perfect Order of Randomness”.

Curtiss and Fisher both employ a hard-edge flat aesthetic to illuminate pop and graphic elements. Simplified forms and lines are used to accentuate the passing of time where dream-like imagery transforms the ordinary into the uncanny.

Curtiss‘s paintings employ a cinematic composition in their intimacy. A close up of the back of a woman’s head feels like a scene from an auteurist film. Everyday suburban settings are infused with a touch of the surreal: a bowl of fruit on fire or a hand stretching out from a bush to light a woman’s cigarette. Like Christina Ramberg (1946-1995) before her, contradictions in every-day life are a large theme in Curtiss’s work. A traditional tea setting between a mother and daughter is juxtaposed by contradicting elements such as a black tea cup, and masculine hands with long red nails. A woman with a conventional hairstyle in a bun mysteriously holds her green painted pointy fingernails close to her face. An unsettling duality, signaling strong feminist undertones, coexists in the protagonists that inhabit Curtiss’s paintings. These women may live in a domesticated environment, but it does not solely define them. They are mysterious and complicated beings.

Curtiss’s intimate subjects are a contrast to the cool colors and shapes in Fisher‘s work. Fisher continues to employ a motif of waves, birds, sunsets and moons. His stylish landscapes of the natural world represent, in the words of the artist, “a personal, but faceless humanity”. Simple shapes are frequently used in representational settings calling to mind a fuzzy dream. Characterized by a style that draws on the simplicity of folk art, Fisher’s inspiration comes from Joseph Yoakum (1889 – 1972) and Chicago Imagist Roger Brown (1947 – 1997), among others. In these paintings, the real is not imagined, rather the imaginary becomes real. A sincere dry humor emanates from the work. “Insert Title” is a painting of an unabashedly psychedelic pink sunset.

Fisher and Curtiss both share an affinity for the unexplained, even the everyday supernatural, and a desire to distill a complex world.

Matthew F Fisher (b.1976, Boston, MA) received a MFA from the Virginia Commonwealth University, Richmond, VA (2000) and a BA from Columbus College of Art and Design, Ohio (1998). His work was recently the subject of a solo exhibition at Taymour Grahne Gallery, New York. Fisher lives and works in Brooklyn, New York.