Justin Liam O’Brien – Losing in the Form of Darkness 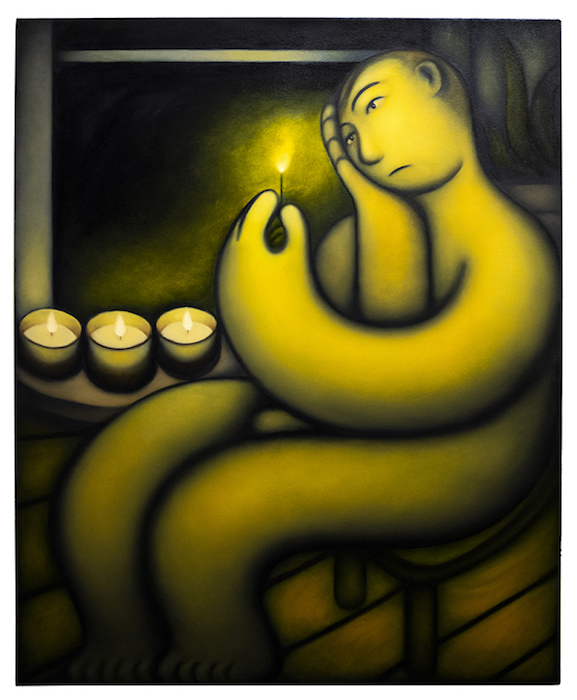 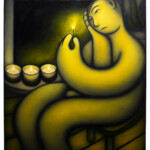 Monya Rowe Gallery is excited to announce the first New York solo exhibition of paintings by Justin Liam O’Brien titled “Losing in the Form of Darkness”.

The title of the exhibition, “Losing in the Form of Darkness”, takes its’ inspiration from David Wojnarowicz’s (1954–1992) memoir titled “Close to the Knives: A Memoir of Disintegration”. Wojnarowicz voiced to Nan Goldin that his reason for writing the book was “to make somebody else feel less alienated: that’s the most meaningful thing to me”. Similarly, O’Brien begs the viewer to empathize. To connect and to feel.

O’Brien’s subject matter speaks to his experience as part of a queer millennial generation ensconced in a culture where Grindr, dick-pics, and hook-up texts are a presumed part of the dating landscape. His paintings of couples affectionately embracing or lone individuals ruminating in closed rooms are tender, sexual and emotional chronicles of the mind. O’Brien’s narratives embrace queer intimacy, but also the longing and confusion that so often accompanies love and relationships. He projects this emotional content onto the viewer by deliberately rendering his subjects almost cartoon-like, and void of distinctive facial features. There is a sense of mystery and depth surrounding these anonymous characters. One can see the exaggerated non-descriptive figures of Tarsila do Amaral (1886-1973) in the work, but there is also a hint of George Tooker’s (1920-2011) delicacy and emotional weight.

Although O’Brien’s protagonists are often depicted together, a feeling of isolation prevails. Rooms, doors and windows are used to heighten the psychological sensitivity. As O’Brien says: “The window has always signified the looking component in the work. That we are always hungry for more. More love, more sex, more control. Just more.”

A book based on Justin Liam O’Brien’s sketchbook titled “Losing in the Form of Darkness”, published by Raw Meat Collective, will accompany the exhibition. A book launch will take place at Monya Rowe Gallery on Thursday, November 21, 6-8 PM.

Justin Liam O’Brien (b. 1991, Flushing, NY) received a BFA from Pratt Institute, Brooklyn, NY and an AS in Visual Arts from SUNY Suffolk, Selden, NY. Recent group exhibitions include Galerie Tanja Wagner, Berlin; Chart Gallery, New York; and Richard Heller Gallery, Los Angeles. In 2018, his work was exhibited in a two-person exhibition with Celeste Rapone  at Monya Rowe Gallery. This is the artists’ first solo exhibition at Monya Rowe Gallery and in New York. O’Brien lives and works in Brooklyn, NY.