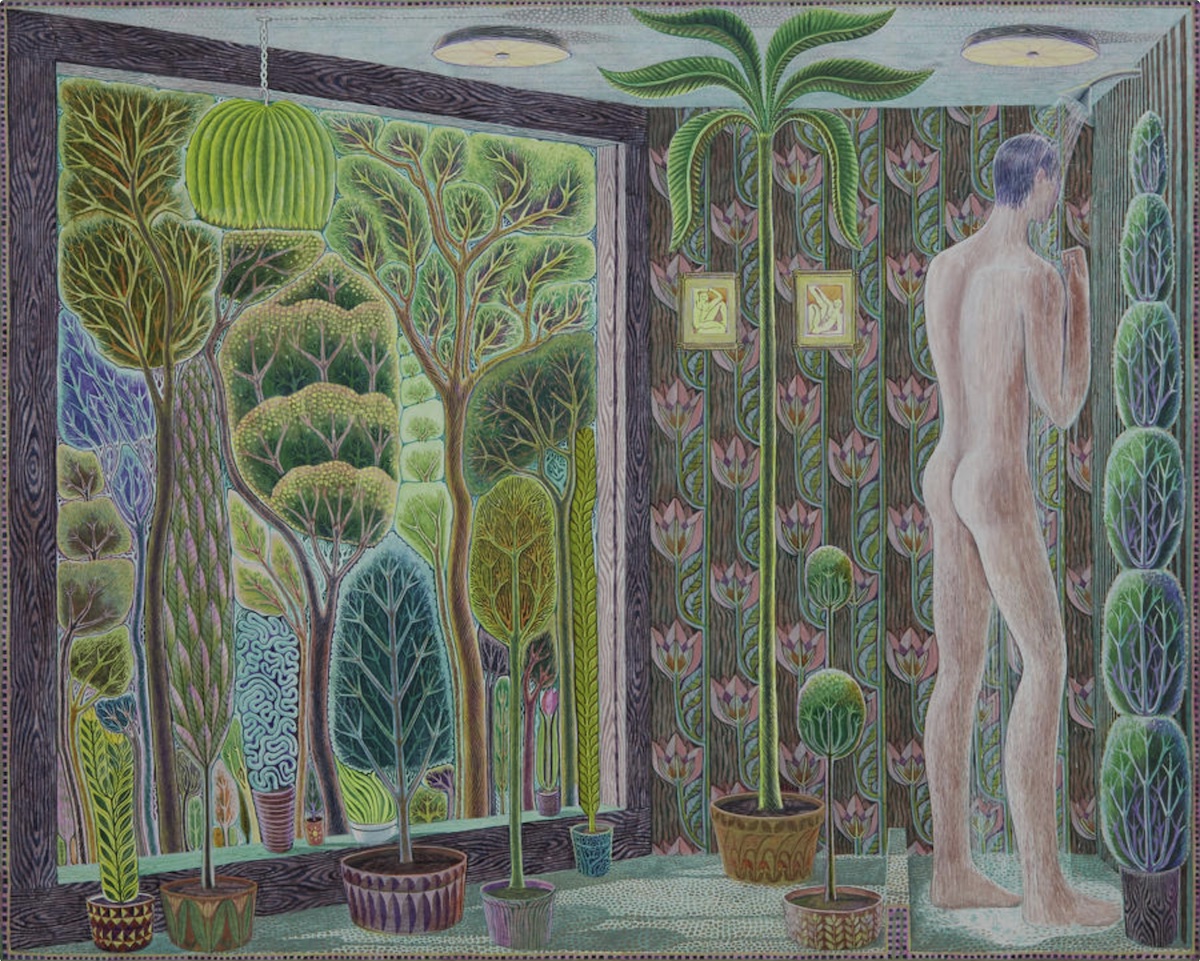 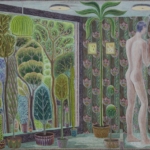 Last year the gallery mounted a summer exhibition titled “The Bedroom Show“, which explored the historical significance of the bedroom throughout art history. Continuing the theme of ubiquitous subjects in the art canon, this year’s summer exhibition is an ode to the humble bathroom which has played a substantial role throughout art history and has taken on its’ own singular significance. Some of the most iconic works of art are related to or situated in a bathroom. In the late 1800’s Edgar Degas created a series of pastel drawings of women drying off after a bath. Also in the late 1800’s, Mary Cassatt depicted a series titled “The Child’s Bath”. In 1917 Marcel Duchamp changed the course of art history with his seminal ready-made, “Fountain”, which suggested that the viewer activates an artwork, not the artist. In the 1920’s Pierre Bonnard showed his wife in a series of tomb-like bathtub paintings. In the 70’s Sylvia Sleigh‘s, “The Turkish Bath”, depicted a group of nude men lounging around together. Although not specifically set in a bathroom, the painting confronted the trope of men painting nude women; Sleigh’s Female Gaze contributed to reversing the privilege of the Male Gaze. In the late 80’s Joan Semmel addressed the aging process with “The Locker Series” which features groups of middle-aged women engaged in bathroom rituals. In the early 90’s Hugh Steers depicted paintings of HIV sufferers being cared for by loved ones in bathrooms. Outside of the visual arts, bathrooms also capture our attention in Film. Drug overdoses, sex, transformation, cruising, even murder are common bathroom tableaus. In “Body Heat” (1981), a banal scene of William Hurt exiting a graffiti-clad pale green tiled public bathroom is charged by a young blonde Adonis (presumably a hustler) discreetly smoking a cigarette in the corner. There are too many bathroom scenes in movies to enumerate in this small text, but one would be remiss not to mention the shower scene in “Psycho” (1960), which produced one of the most legendary moments in film.

Polina Barskaya (b. 1984, Cherkassy, USSR) received a MFA from Pratt Institute, Brooklyn, NY and a BA from Hunter College, NY. Barskaya received an Artist Fellowship in Painting from New York Foundation of the Arts (NYFA) in 2021, and an Elizabeth Greenshields Foundation Grant in 2020. Recent exhibitions include Taymour Grahne, London; Althuis Hofland Fine Arts, Amsterdam; Marianne Boesky Gallery, NY; and Monya Rowe Gallery, NY. Her work has been featured in Artforum, New York Magazine, Artnet and Hyperallergic, among others. The artist lives and works in Brighton Beach, Brooklyn, NY and is represented by Monya Rowe Gallery, NY.

Larissa Bates (b. 1981, Burlington, Vermont) received a BA from Hampshire College, MA. Recent group exhibitions include Taymour Grahne, London and Monya Rowe Gallery, NY. Upcoming group exhibitions include “Gilded: Contemporary Artists Explore Value and Worth” at the Weatherspoon Art Museum, Greensboro, NC, travels to Hunter Museum of American Art, Chattanooga, TN and Hood Museum of Art, Dartmouth, Hanover, NH. Her work has been reviewed in The New York Times, The New Yorker, Artfourm, among many others. Bates lives and works in Hastings-on-Hudson, NY and is represented by Monya Rowe Gallery, NY.

Cindy Bernhard (b. 1989, Chicago, IL) ) received a MFA from Laguna College of Art and Design, Laguna Beach, CA and a BFA from American Academy of Art, Chicago, IL. The artist lives and works in Chicago, IL, and is represented by Richard Heller Gallery, LA.

Aubrey Levinthal (b. 1986, Philadelphia, PA) received an MFA from the Pennsylvania Academy of Fine Arts (PAFA), Philadelphia, PA and a BA from The Pennsylvania State University, University Park, PA. She is a three-time recipient of an Elizabeth Greenshields Foundation Grant and in 2017 was awarded a residency at Ballinglen Arts Foundation, North County Mayo, Republic of Ireland. Recent exhibitions include Haverkampf Galerie, Berlin; Workplace London: Fleisher/Ollman, Philadelphia and Monya Rowe Gallery, NY. Levinthal’s work is included in the group exhibition “A Place for Me: Figurative Painting Now” at The Institute of Contemporary Art (ICA), Boston through September 5, 2022. The artist lives and works in Philadelphia, PA and is represented by Monya Rowe Gallery, NY.

Erin Milez (b. 1994, Pittsburgh, PA) received a MFA from New York Academy of Art, NY and a BA from Seattle Pacific University, Seattle, WA. Her work has recently been exhibited at Lorin Gallery, LA. Milez lives and works in Bayonne, NJ.

Justin Liam O’Brien (b. 1991, Flushing, NY) received a BFA from Pratt Institute, Brooklyn, NY and an AS in Visual Arts from SUNY Suffolk, Selden, NY. Recent exhibitions include Richard Heller Gallery, LA; Chart, NY, Taymour Grahne, London and Monya Rowe Gallery, NY. O’Brien’s work has been featured in Juxtapoz, Artforum, and W Magazine, among others. O’Brien lives and works in Brooklyn, NY and is represented by Monya Rowe Gallery, NY.

Bryan Rogers (b. 1977, Waterbury, CT) received an MFA from Pratt Institute, New York, NY and a BFA from Appalachian State University, Boone, NC. Recent group exhibitions include The Hole, NY and Taymour Grahne, London. Rogers will have a solo exhibition at Monya Rowe Gallery in October 2022. The artist lives and works in South Orange, NJ and is represented by Monya Rowe Gallery, NY.

Anastasiya Tarasenko (b. 1989, Kiev, Ukraine) received a MFA from the New York Academy of Art, NY and a BFA from the Fashion Institute of Technology (FIT). In 2019 she completed the PLOP Artist Residency, London, U.K. Her work was recently exhibited at Steven Zevitas Gallery, Boston; Kravets Wehby, NY; and Monya Rowe Gallery, NY. The artist lives and works in Queens, NY and is represented by Monya Rowe Gallery, NY.

Natalie Terenzini (b. 1996, San Diego, CA) received a MFA from the New York Academy of Art, NY and a BFA from Laguna College of Art and Design (LCAD), Laguna Beach, CA. Terenzini lives and works in Brooklyn, NY and is represented by Thierry Goldberg Gallery, NY.